For the faction that controls the Pentagon, the military industry and the oil industry, the Cold War never ended. It went on ‘below the radar’ creating a global network of bases and conflicts to advance their long-term goal of Full Spectrum Dominance, the total control of the planet: land, sea, air, space, outer space and cyberspace …

The book presents many captivating and forceful arguments, showing deep thinking over some events that shook the world. The research is extensive, but some conclusions seem at times far fetched.

Not everything he says is wrong though. If Engdahl’s book is read in parallel with The New Digital Age by Jared A. Cohen and ex-Google CEO Eric Schmidt, many of the possibilities and opportunities created by digitalisation may well be used for military purposes. 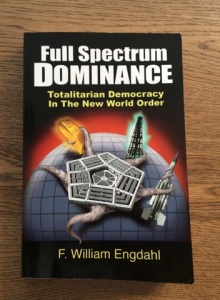 Engdahl is a profound thinker, using a realpolitik analysis apparatus to make a critique of the neo-conservative military doctrine. Pentagon is seen as a cunning force, having no scruples in imposing its will.

The author, William Engdahl, is an American writer with a degree in engineering and jurisprudence from Princeton University and a graduate study in comparative economics at the University of Stockholm. He is an original thinker, writing and commenting on the major events in the world.