There are an untold number of cultural similarities that have never been fully explored because of the difficulty of communication; in a future revolutionary setting, seemingly random connections between distant populations or people will entail knowledge transfer, outsourcing certain types of duties and amplifying the movement’s message in a new and unexpected way.

This future is largely dominated by digital, including in the medical field, in house appliances, with driverless cars, new ways of a state to govern, all interconnected.

There are information privacy concerns, a discussion on Assange’s Wikileaks motives and Navalny’s corruption exposures. 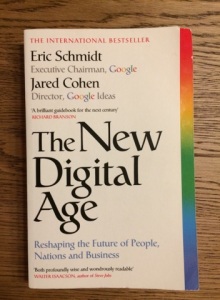 The media is in the era of instant information. Trust is important to determine the veracity of news. News become instant and losses quickly it’s value. As anyone can become a source of news, veracity becomes more important.

An important point made repeatedly by the book is that anything written online remains forever. There is no erase button. No privacy settings or even deleting emails can block that [the book was written in 2013, before the European Union’s General Data Protection Regulation].

States are much interested in the use of data and a fragile equilibrium is set between security concerns and individual privacy.

The book is very forward-looking and opens a few delicate debates. However, while putting forward many interesting ideas, I felt that I am reading nothing new. I struggled since 2016 to finish the book.